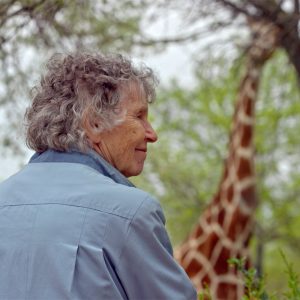 Anne Innis Dagg is our heroine: pioneer, groundbreaking scientist, underdog, animal rights activist, feminist, teacher and mother. The youngest child of academics Harold Innis and Mary Quayle Innis, Anne has received worldwide recognition for her work with giraffes, becoming not only the first person to study giraffe behaviour in the wild, but also the first person to study any wild animal behaviour in Africa. She is the author of over 60 scientific papers and 24 books including, Pursuing Giraffe: A 1950’s Adventure (2006); 5 Giraffes (2016); and Smitten by Giraffe: My Life as a Citizen Scientist (2016). Anne’s academic interests include giraffes and Africa; gaits of mammals; sexual bias in behavioural biology; feminism (especially in academia); a historical study on Canadian women non-fiction authors; sociobiology; animal behaviours; aggression; and human evolution. Her honours include being named one of the top eight women biologists in Canada (1975); receiving a pioneering award from the Association of Giraffe Care Professionals (2010); and a lifetime achievement award from the International Giraffid Conference (2016). More recently, Anne was featured in “Courage and Passion: Canadian Women in Natural Sciences”, an exhibition which celebrates Canadian women who broke barriers to pursue their passion for science at the Canadian Museum of Nature. She was also named the 2018 Canadian Eco-Hero at Planet in Focus. 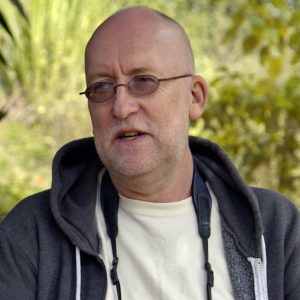 John Doherty is Project Coordinator for the Reticulated Giraffe Project in Samburu, Kenya. He is a member of the Ecosystem Biology & Sustainability Research Group in the School of Biological Sciences at Queen’s University Belfast. John has degrees from the Universities of Oxford and Pretoria and a postgraduate certificate of education from the University of Bristol. He has worked, studied and travelled extensively in eastern and southern Africa, the Indian subcontinent, the Iberian peninsula, Britain, Ireland, Norway and the High Arctic, focusing especially on species conservation, the management of protected areas, wildlife conservation within human-dominated landscapes and environmental education. He made his first study of giraffes at the age of 10, and he first worked in northern Kenya (as a carpenter) in 1978. 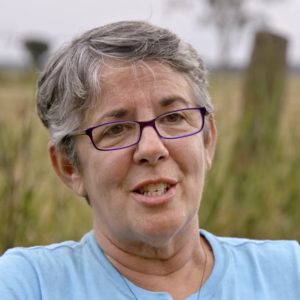 Lisa Clifton Bumpass is a Giraffe Behaviourist. She works with Amy Phelps at the Oakland Zoo in Oakland, California. Clifton-Bumpass provides professional coaching, training update lectures, behaviour analysis, organizational animal training program review, and physical skills development to animal trainers of both domestic and exotic species. Her company, A Step Beyond, also provides demonstrations, presentations and topic focused discussions for high schools and universities on the real life application of applied behaviour analysis in zoo settings. She was responsible for convincing Anne to return to Africa, for the first time in well over a half-century, when she invited her to go to giraffe indaba in Nairobi. 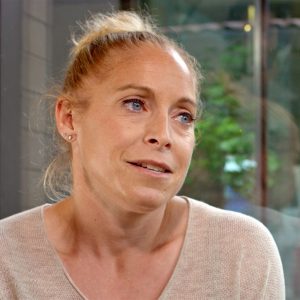 Amy Phelps is the Lead Giraffe Keeper at the Oakland Zoo in Oakland, California. She was honoured with the 2006 Jean M. Hromadka Excellence in Zookeeping Award from the American Association of Zookeepers, Inc. Her unusual methods have gotten her department and herself to the point where they’re treated — by the giraffes — “almost like peripheral herd members”. When Amy was a little girl, she saw Anne Dagg as an icon and read her giraffe biology textbook cover to cover. Years later, at a crucial time for the species, Amy was instrumental in finding Anne, bringing her back into the giraffe and conservation community, and spearheading the award recognition by the community. 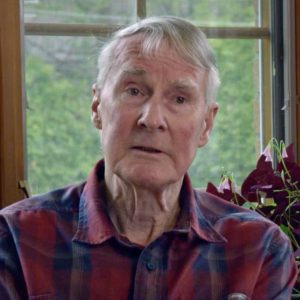 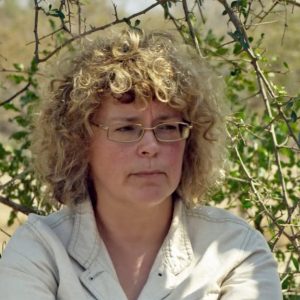 Mary Dagg is Anne’s daughter and the financial officer of a large Bay Street law firm. She jokes that she did not inherit her mother’s biology gene. Before accompanying Anne on her trip back to Fleur De Lys in South Africa, Mary had not read Anne’s books or fully realized her mother’s stature in the giraffe community. Mary also accompanied her mother to the Women’s March in Washington pictured at the end of the film — an event that Anne felt strongly about attending for both women’s rights and the future of the planet. 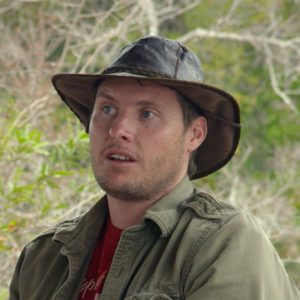 A native of South Africa, Francois Deacon is the youngest giraffe scientist with boots on the ground (and Anne the oldest). When the two finally meet in South Africa, he describes what an honour it is, and tells her about the cutting-edge science he’s doing. Francois has developed an innovate way to collar and attach GPS devices to giraffe, so he can collect data 24/7. Giraffe research has come a long way since 1956 when Anne sat in a car and recorded notes by hand. Dr. Deacon is a lecturer and researcher in the Department of Animal, Wildlife and Grassland Sciences at the University of the Free State in Bloemfontein, South Africa. 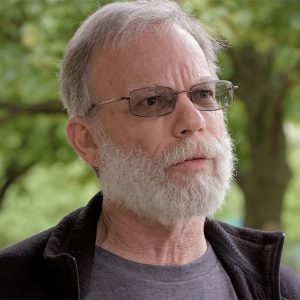 Fred Bercovitch is Executive Director and a founding team member of Save The Giraffes. Fred’s childhood dream was to become Tarzan. He has always loved animals and the outdoors, spending one summer hiking from Yosemite National Park to Mount Lassen on the Pacific Crest Trail before it was completed. He earned his Ph.D. from UCLA, following a two year study of baboons in Kenya. He then became a Postdoctoral Fellow at the Wisconsin Primate Center studying rhesus monkeys before becoming a Staff Scientist at the Caribbean Primate Research Center in Puerto Rico. In 2000, he moved to San Diego to begin work as the Director of the Division of Behavioral Biology at the San Diego Zoo and in 2010, he accepted a position as Professor at Kyoto University in Japan in order to help launch a new program that was designed to recruit graduate students from around the world who wanted pursue an advance degree studying wildlife biology, conservation, or primatology. In addition to giraffes, baboons, and rhesus monkeys, he has studied elephants in Africa and the zoo, koalas in Australia, snow monkeys in Japan, and California condors, Nile lechwe [an African antelope], and cheetahs in zoos. When not working, Fred thrives on hiking, camping, reading, sports, politics, and the news. 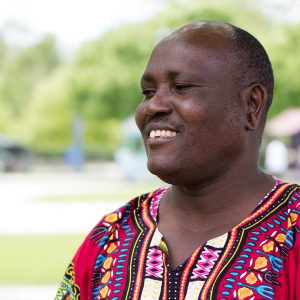 Jacob Leaidura is a Samburu warrior and naturalist. He is the Project Naturalist and John Doherty’s partner in the Reticulated Giraffe Project. He is an experienced observer of northern Kenya’s richly diverse flora and fauna and he has an encyclopaedic knowledge of its spectacular birds. Jacob is certified as a naturalist by the Kenya Professional Safari Guides Association and has worked in Samburu, Buffalo Springs and Shaba National Reserves for more than 25 years. A keen environmental educator, Jacob is adept at passing on his enthusiasm for nature to his fellow Kenyans and to visitors to the country alike. As a small child, he was afraid of reticulated giraffes when he came across them in the bush on his long walk to school. Now, he knows hundreds individually and has become an expert on their behaviour and their social interactions. His personal favourite is known as DC10. 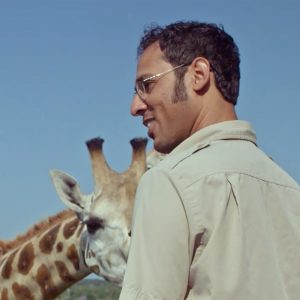 Jason Pootoolal is the former Head Game Warden at African Lion Safari, where he led the team working with giraffe, white and greater one-horned rhino, and tapir. Jason studied zoology at the University of Guelph where he obtained his BSc degree. In 2003, he began working at African Lion Safari. He worked with many different animals before gravitating towards giraffe. Working with a team of collaborators on four continents, he is developing a program with the endangered Rothschild Giraffe to help control breeding and exchange genetic material. Along with his research partners, they have characterized the sonomorphology of pregnant and non-pregnant giraffe as well as correlated reproductive events with endocrine profiles by use of ultrasonography. Currently, he is developing advances in assisted reproductive techniques in giraffe. This includes manual semen collection, development of extending and freezing protocols, as well as both fresh and frozen artificial insemination. The aim of the research is to develop methods for conserving current captive and wild genetics, making the transfer of genetic material to become possible between distant captive populations, and between wild and captive populations as well as populations separated by time. The program he and his fellow staff members carry out with the giraffe herd at African Lion Safari garnered them an award for Outstanding Achievement as well as the prestigious Baines Award from the Canadian Association of Zoos and Aquariums. Pootoolal has contributed to several published research programs as well as collaborated with several other giraffe research endeavours. In The Woman Who Loves Giraffes, he invites Anne to witness an important ultrasound with a pregnant giraffe. 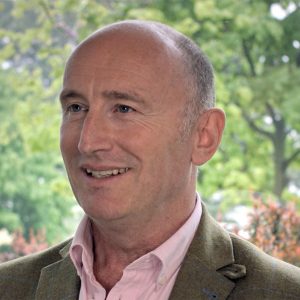 Andy Tutchings is a fellow of the Royal Geographic Society and a member of the Giraffe and Okapi Specialist Group, of the Species Survival Commission at the International Union for Conservation of Nature (IUCN). Andy does conservation focused research in Evolutionary Biology, Ecology and Systematics (Taxonomy). One of the recent publications he worked on is “How Many Species of Giraffe Are There?”. He is an expedition leader and a partner in Kompass Team Training and Survival Zone© Wilderness Academy. The latter delivers wildlife ranger, anti-poaching and survival/bush-craft training for professional qualifications or personal/personnel development on location in Northwest Namibia. 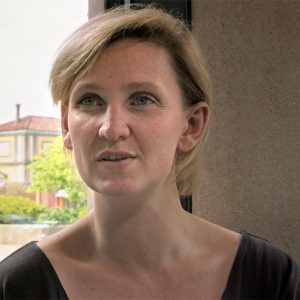 Zoe Muller is a Post Graduate Researcher for the Mammal Research Unit, University of Bristol (UK), and the first ever recipient of the Anne Dagg Excellence in Science Award. Zoe is a member of the IUCN/SSC International Giraffe Working Group, involved with the Rothschild’s Giraffe Research Project in Kenya. She was the first to observe grieving behaviour in mother giraffe (and the other females in the group) when a giraffe calf (baby) dies. Her most recent study investigates how the grouping behaviour of giraffes differ in response to numerous factors, such as predation risk, habitat type and the characteristics of individuals. 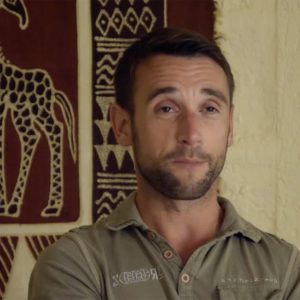 Gareth Chamberlain is a British citizen who has worked with many ungulate species in his career. These include antelopes and deer, but he counts giraffe and okapi as his favourites. He’s been an animal keeper at the London Zoo, Chester Zoo, Twycross Zoo , Malwell Wildlife and Port Lympne Reserve. He’s also worked with the GCF Giraffe Conservation Foundation in Namibia. Gareth has huge admiration and respect for the people around the world trying to gather information on giraffe in order to increase conservation efforts. The first time he met Anne Innis Dagg, he brought his original copy of the giraffe keepers ‘bible’ for her to sign.