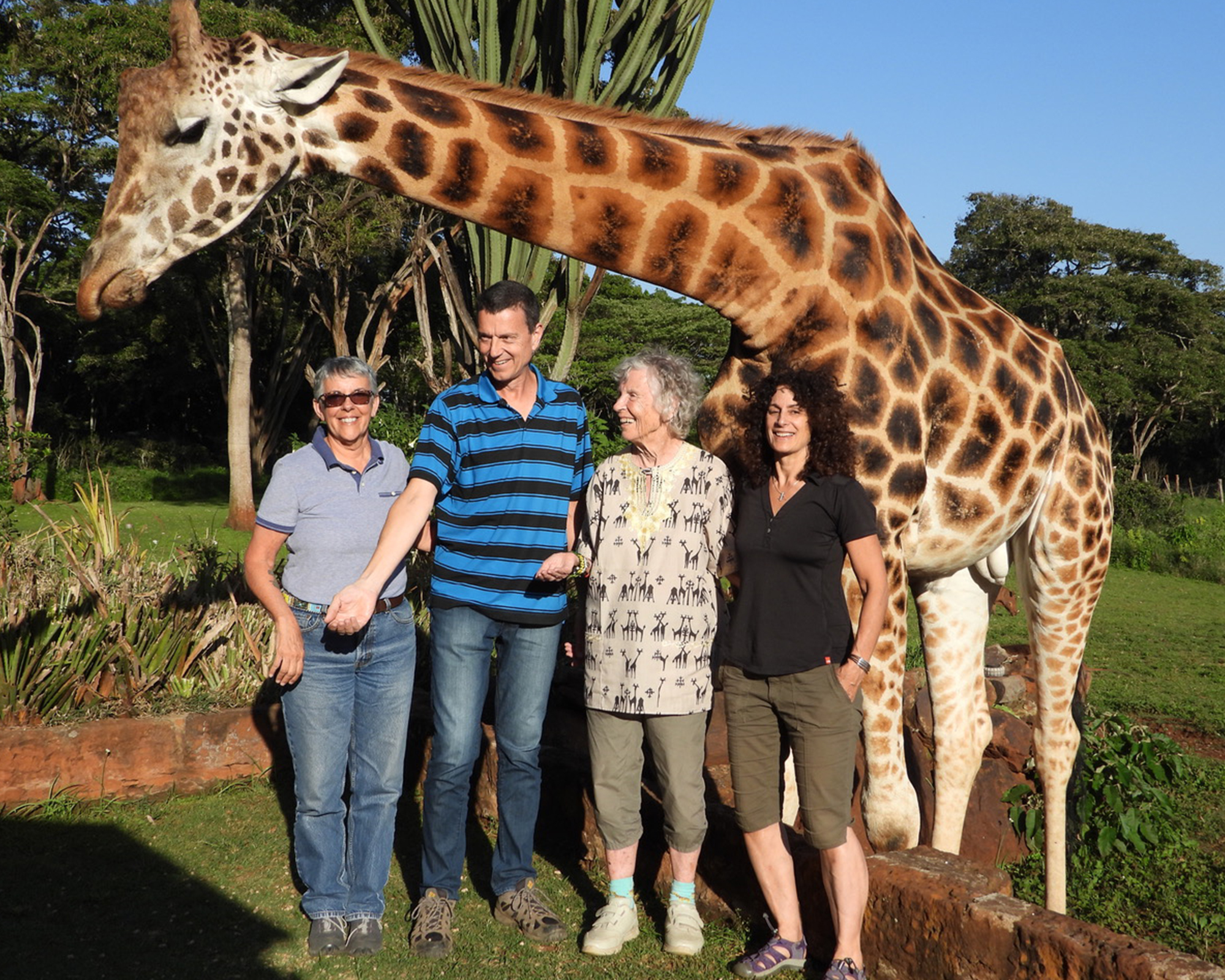 In January 2020, all excited, I flew with my son Ian and the film maker Alison Reid to Nairobi for a three-week tour in Kenya. This would be our second adventure with giraffes! Ali and I had been there before, in 2013 when we were making the documentary “The Woman Who Loves Giraffes”.  Ian was pleased to be able to come with us this time to explore a part of Africa and these amazing animals.

We slept in Nairobi before setting out to see giraffes. After we had picked up a rented van which Ali would drive, we rode for miles through Nairobi. I had remembered this as a small town with few amenities, but now it was in a huge modern city, far more sophisticated than I would have thought possible. When I had been there in 1957, men usually rode horses or bicycles, but now there were huge numbers of cars, and buses on all the many roads. People were everywhere!

Our first destination was to visit the reticulated giraffe (Giraffa reticulata) that lived in a large area about 300 km north of Nairobi. We had visited them a few years before, so we were anxious to see which animals we would remember and whether many youngsters had been born since that time. But giraffe have many different shapes and sizes of patches on their bodies, and although there were still many of these wonderful animals spread about eating leaves from equally many trees, we weren’t sure whether they were the individuals that we had seen before.

We were pleased again to meet John and Jacob who do their giraffe work in the huge area called Samburu National Reserve. They were sad that many giraffe are still being killed illegally in some areas outside the reserve – sometimes for bushmeat and sometimes for trophy hunting. Although there had been 150,000 of them in 1990s, there are now less than 100,000. This was very upsetting to hear!

Another highlight of our trip was a visit to Giraffe Manor where people come from around the world to sleep in a spectacular house with giraffe wandering around outside. At breakfast as I sat down at a table by the window, a huge male giraffe stuck his head through the opening and took a rose I held out for him. After one he wanted another, and then another! I was excited beyond belief and gave him everything edible on my plate. Later, when he wandered on, I finally calmed down and helped myself to food too.

On a Saturday we visited the Giraffe Centre which has several giraffe and many children and parents. It was showing a short clip of our movie which they loved. They spent much time after the film asking Ali and me questions about The Woman Who Loves Giraffes. It would be played later as well.